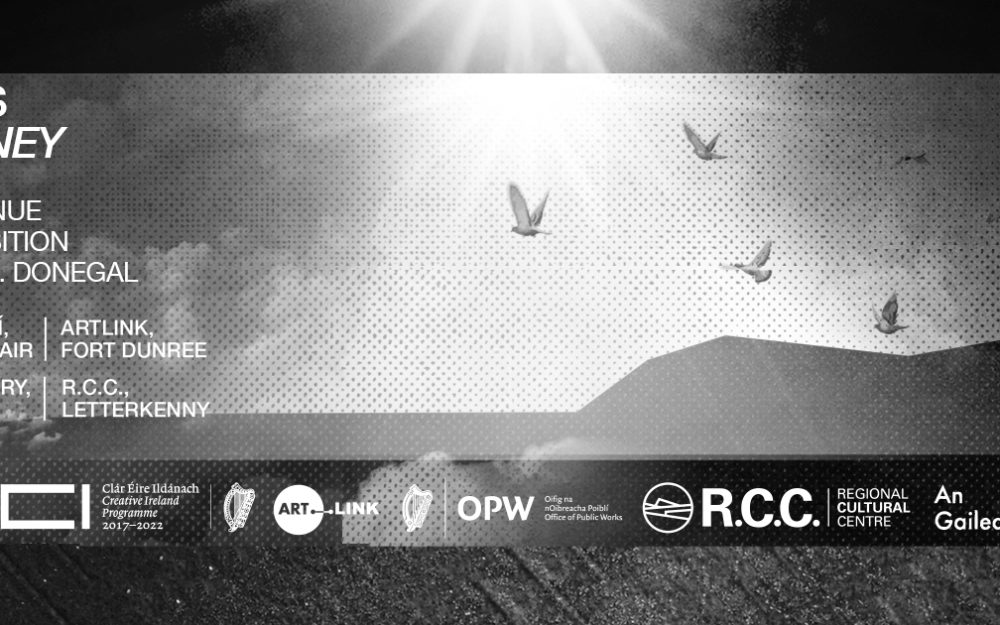 This visual art ‘journey’ traverses through Donegal’s cultural landscape via a multi-venue exhibition featuring Irish based artists exploring the societal shifts that shape our collective identity.

Turas runs from June to September 2021 as part of the national ‘Colmcille 1500’ celebrations and presents current and recent work from a selection of established and emerging artists, chosen to represent a wide range of contemporary practice throughout Ireland.

Supported by Creative Ireland, Arts Council of Ireland and Donegal County Council. All exhibitions are free of charge. 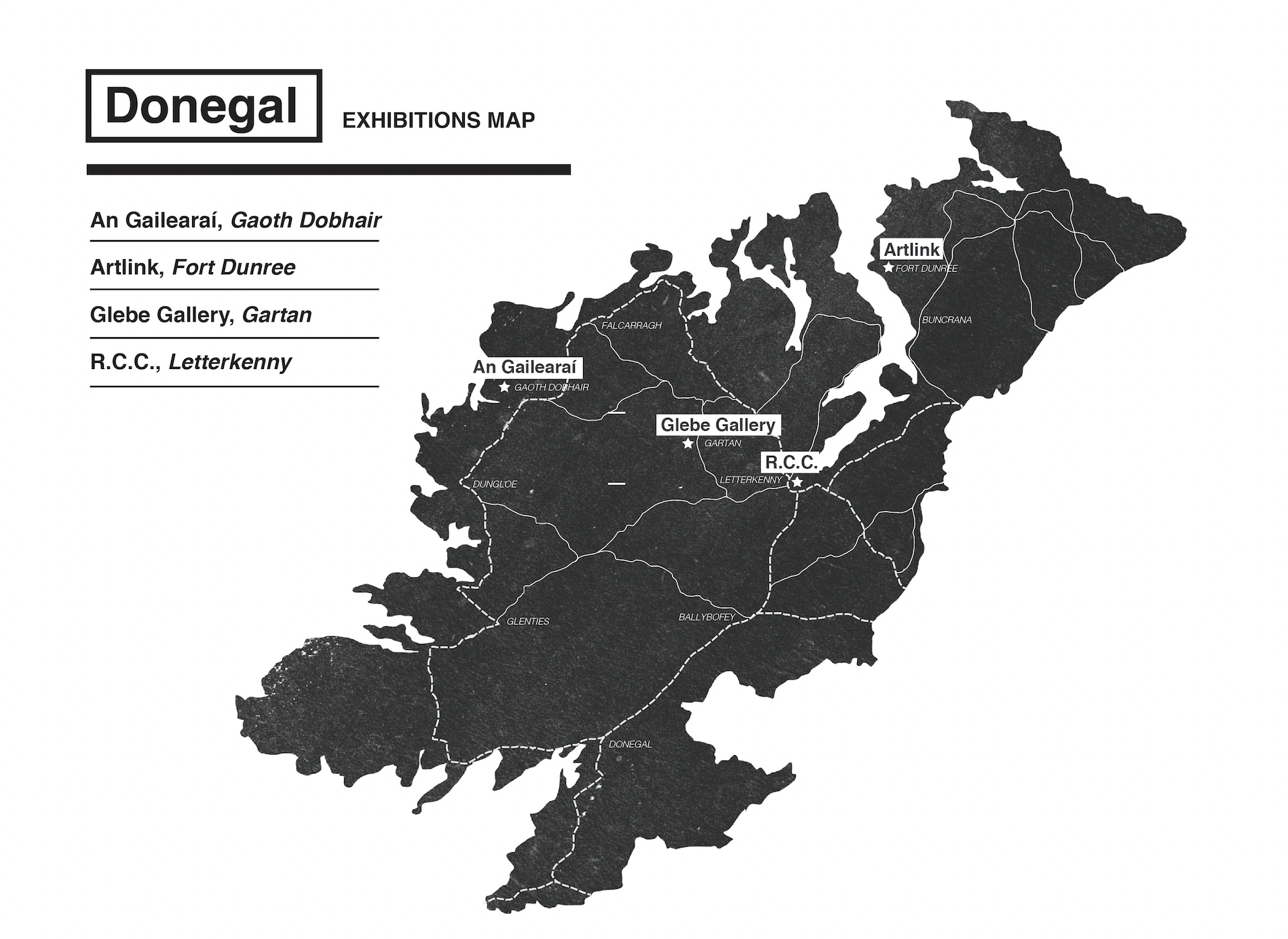 Book a FREE gallery visit to the RCC

This trilogy of short films that reflect on the impact of global migration from the point of view of young people. The films explore the concerns expressed by young multi-ethnic youth growing up in a time of rapid change in Ireland and internationally. The research for each film refers to historical antecedents from Civil Rights in the ‘60s to the Black Lives Matter movement in 2020.

Celina Muldoon | Who Can Cool Your Raging Heart?

Exploring links between climate change and anxiety and the effects of these on the development of identity in the brain, Celina uses projection mapping, animation, digital drawing, costume and sculpture.

High Cross is an overlaying of history and fable and the recognition of the spirit of place. The high cross which forms the back drop to this installation is an exact scale copy of the ringed cross at Ray. The entire surface of the cross is covered in bible and prayer book pages that belonged to Sarah’s family and were passed down from one generation to another.

This artwork depicts incidents of fighting politicians in parliament from all over the contemporary world. In the midst of rising global tensions, this work reflects upon the modern anxiety and rising levels of insecurity that has permeated all spheres of the personal and political and of which has come to typify contemporary experience.

AE86 is a metaphorical vehicle for understanding the back roads of rural Ireland as a theatre for vernacular culture and escapism. The work is titled after a popularised automobile prominent in Irish car culture, the Toyota Twin Cam AE86 and examines the use of cars and the backroads of Donegal as a stage where one performs acts such as drama, play or destruction.

Talamh Buan is a group exhibition that connects the work of six painters of contrasting styles that have each settled in County Donegal from other parts of Ireland and beyond. Featuring work by Heidi Nguyen, Mantas Poderys, Brian Byrne, Paul Hallahan, Ian Gordon and Liz Doyle.

Border Tales directed by Keith O’Grady and produced by the RCC. Young people from border areas were trained in film techniques and collaborated with the director to produce a feature length documentary of interviews conducted with their grandparents and exploring themes such as childhood and ‘the troubles’. (2021, 90 minutes).

Book a FREE gallery visit to the RCC

Almost 50 artists from 13 counties across the island of Ireland and Canada responded to the theme ‘Turas’ for the annual Artlink Members Show, which has been running since 2014. Forty wall based artworks, eight sculptures and three films make up this year’s exhibition Bring the Mind Home, curated by Kaitlynn Webster from 126 Gallery in Galway.

Since the dawn of time, men and women and even some white eagles have been recognized as gifted with the ability to change the weather. These  “tempestarii”, storm tamers or weather makers, were venerated, feared, sometimes hated for the consequences of their faculties on the land and the population. While contemporary engineers promise the diversion hurricanes, the cooling down of the planet or the increase of the atmosphere’s albedo, this project entails to form a large collection of objects and practices revealing attempts to tame the weather across time and continents.

Based in Paris, Anaïs Tondeur was artist-in-residence at Artlink in 2018 and 2019. Her artistic practice forms at the point where  disciplines meet. Crossing natural sciences and anthropology, myth making and new media processes, she creates speculative narratives and investigations through which she proposes other ways of being in the world and other modes of co-habitation with the other-than-humans: plant, rocks, air, water.

Yesenia Thibault-Picazo is a Frenchborn interdisciplinary designer and musician exploring the narrative  potential of materials through collaborations with experts in the field of geology, anthropology, and craft.  She defines herself as a ‘material teller’, and she uses design as a tool to engage diverse audiences in con temporary ecological challenges.

Bassam Al-sabah, Aideen Barry, and Sean Hillen look at topics such as authenticity, worth, journeys, relocation and repositioning.

Bassam Al-Sabah works across digital animation, painting, sculpture and textiles to convey intricate visions of war, resistance and perseverance. Themes such as displacement, nostalgia and personal mythology are explored through reference to Japanese anime cartoons, which were dubbed into Arabic and broadcast throughout the Middle East from the 1980s to today.

Aideen Barry is a performance artist who also makes animations, films, drawings and sculptures. She looks at the familiar and reinterprets it. Barry feels at odds with the way things are and out of place in the world. She asks her audience to observe amplified behaviours and to look a their own humanity.

Sean Hillen works in many mediums but is best known for his collages. He takes a wary look at Irish life and how we consume information and propaganda. Hillen looks at how we move through our world and navigate every day life and attribute worth to our surroundings and inner selves.

Bloomer and Keogh resurrect their 2005 Venice Biennale masterpiece ‘Bin Boat’ for an installation on Gartan lake in homage to Colmcille. Is this the bin boat’s last outing before it becomes a hen house?

Turas: Mothertongue is concerned with the possibilities for cultural restitution following the centuries of emigration giving rise to the Irish diaspora. Central to the project is a journey undertaken by the artist in 1989. Travelling by bicycle, she and her partner/assistant followed the river Foyle, and its tributary, the Finn, inland, from the Foyle estuary to Loch Finn, Co. Donegal. Camping en-route, they recorded the journey with a portable sound recorder and Super 8 film camera.

Caoimhghín Ó Fraithile is interested in evoking a sense of mystery in his artistic practice and does this in a number of ways; from creating large-scale site-specific installations where the community is involved, to making large-scale as well as small, intimate drawings. The centrepiece of Ó Fraithile’s three works in the Turas exhibition is ‘Sweeney Sacks Rome” which is a reverse turn of events where Sweeney takes revenge on the church that banished him to the wilderness. 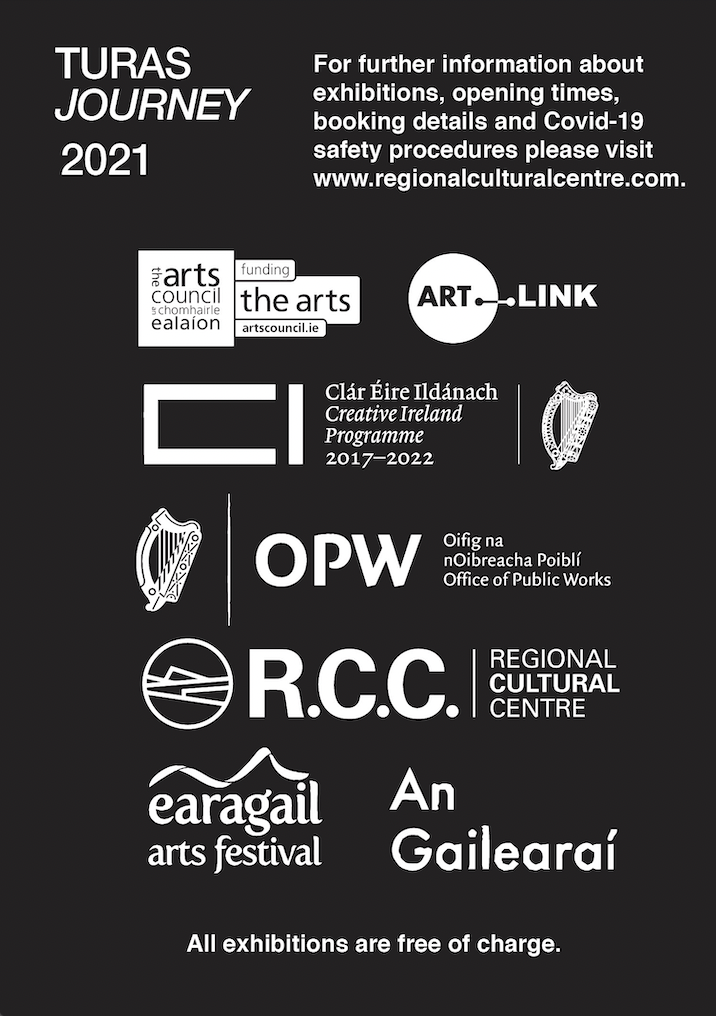