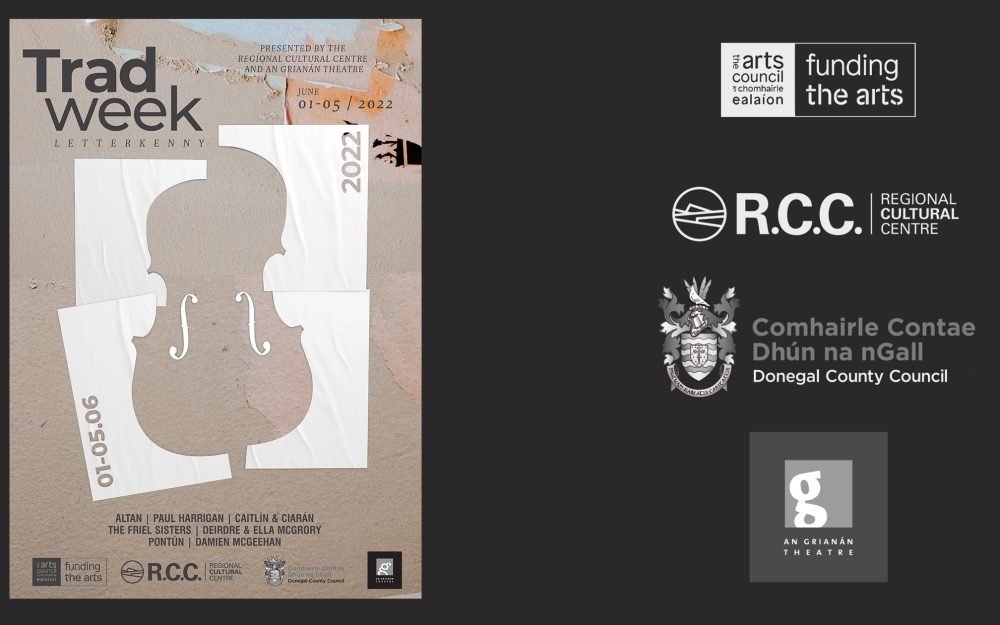 THE NEW dates for Letterkenny’s annual celebration of Irish traditional, folk and world music have been set for June Bank Holiday Weekend.

Rescheduled from its usual January dates, Letterkenny Trad Week 2022 will be held from Wednesday 1st June to Sunday 5th June.

Presented by the Regional Cultural Centre (RCC) and An Grianán Theatre, the annual festival features a host of exciting acts in its 2022 line-up.

The line-up has a particular Donegal flavour this year with acts from across the county featuring, beginning with highly-regarded fiddle player Damien McGeehan who will officially mark the launch of his recently latest release in the RCC on Wednesday, 1st June.

The Ardara native recently released his eagerly-anticipated second solo album, Kin, which has received rave reviews at home and abroad. Receiving airplay across the globe, Kin has been featured as album of the week on RTE RnaG, BBC Radio nan Gàidheal and has been described by BBC Radio’s Frank Hennessy as ‘a full-blown fiddle masterclass’.

The new super group Pontún adds brings a blend of folk traditions from Ireland and Africa to the RCC on Friday, 3rd June. The Irish-based band features Éamonn Galldubh on whistle and uilleann pipes, Robbie Harris on percussion, Niwel Tsumbu on guitar and vocals and the legendary Steve Cooney also joins them on bass.

The spirit and sound of Altan, who make a very welcome return to An Grianán Theatre for Trad Week on Saturday 4th June, comes from the deep and rich musical tradition of their native County Donegal. Fronted by one of Donegal and Ireland’s leading musical ladies, Mairéad Ní Mhaonaigh, Altan always bring high energy and world class performances.

The 2022 festivities will come to a close with a real hooley in the RCC with the double-header that is Caitlín & Ciarán and The Friel Sisters on Sunday 5th June.

Acclaimed Irish musicians each in their own right, Gaoth Dobhair-based Caitlín Nic Gabhann and Ciarán Ó Maonaigh have joined forces to create one of traditional music’s most impressive acts.

Partners on and off stage, the pair’s spirited music and dance is rooted in the tradition; brimming with soul and life. Through fiddle, concertina and dance, Caitlín and Ciarán breathe fire into musical pieces, combining their arts with chemistry and energy.

The Friel Sisters, Anna, Sheila and Clare Friel are young traditional musicians born and brought up in Glasgow, Scotland with their family roots firmly entrenched in the Donegal Gaeltacht.

They play a mixture of music interspersed with songs in English and Irish, many from their family repertoire. Being siblings, they achieve a close blend on fiddle, flute and uilleann pipes.

Letterkenny Trad Week, presented by the Regional Cultural Centre & An Grianán Theatre with the kind support of Donegal County Council & Arts Council Ireland, takes place from 1st to 5th June. Click here for more information on all events and bookings.