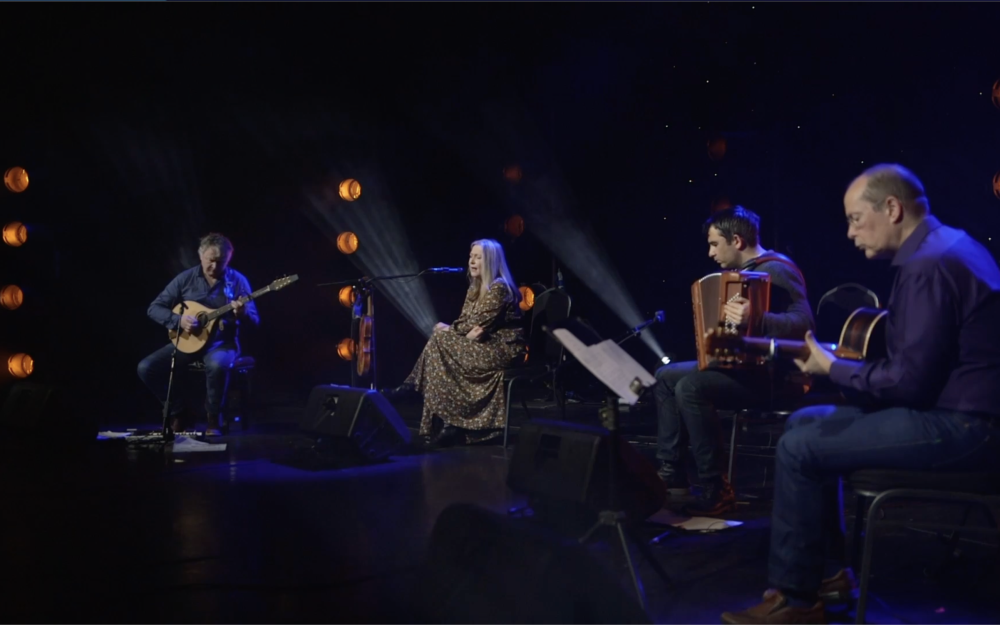 MUSICAL programming streamed from and produced by the RCC in Donegal was enjoyed by close to an estimated 100,000 people around Ireland and across the world last month.

In fitting with its title, the programme, which featured a concert commissioned by An Grianán Theatre for Letterkenny Trad Week 2021, and was filmed and directed by staff of the Regional Cultural Centre (RCC) Letterkenny, proved to be a real light of hope for viewers.

In its review of the programme, The Irish independent wrote: “Friends and family came together to play pieces that were in turns vibrant and elegaic, rich with the promise of spring, and of hope. The music and playing were fantastic, but mostly it was just a balm to the soul to see human beings together again.”

Mairéad Ni Mhaonaigh said: “I was delighted that  my composition Ré an tSolais was broadcast on primetime TG4  on Saint Patrick’s Day. It showed that the artistic and production standards of our Donegal arts community is of world standard and can compete with the best.”

Proinsias Ní Ghráinne, Commissioning Editor TG4, welcomed the addition to the station’s St Patrick’s Day line-up, bringing it to a national audience and is now available on the TG4 Player.

She said: “TG4 were delighted to bring Ré an tSolais to a national audience on St. Patrick’s Day. Ré an tSolais is an example of the wonderful composition and artistic endeavour that has flourished against all odds during this most challenging year for musicians and arts.”

The RCC also joined forces with Letterkenny Chamber of Commerce and Highland Radio to present a music stream featuring a host of Donegal talent, at home and abroad, which was watched and listened to around the globe on St Patrick’s Day.

Included in the line-up were renowned musicians Séamus McGuire and Steve Cooney who teamed up for the very first time for this special broadcast.

Séamus said the invitation to join forces with fellow respected musician Cooney was ‘most welcome’. “It gave Steve and me an opportunity to kick-start an exciting new collaboration, performing on two instruments [viola and guitar] which are rarely heard together. We’ve been delighted with the response.

“We have plans to develop the collaboration further, so this invitation to perform on the St Patrick’s Day Music Stream was extraordinarily timely and supportive. Our thanks to Jeremy and his team at RCC Letterkenny for this opportunity.”

General Manager of the RCC, Jeremy Howard said: :”I’m extremely proud of the wealth of musical talent Donegal has to offer and delighted that the RCC can help showcase this on a global stage. “We have a very small team at the RCC but every one of them has worked extra hard in adapting to our new environment and ultimately learning how to better support our local artists and new ways of serving our community.”

Michael Margey, President of Letterkenny Chamber, said the event was a tremendous partnership between the business community, the RCC, Donegal County Council and ‘our fantastically-talented musicians’.

He said: This was a hugely important event on our National Day to get our flag up high for Donegal and Letterkenny in midst of the pandemic when our resilience and staying power is pushed, and to give something back to our customers and the public.

“It was a special event, a pleasure and a privilege and to say thanks to the backroom teams at the chamber and RCC for producing a show with production values that were as good as RTÉ any day of the week.

“This event offers much promise, and rich and fertile ground for similar and future collaborations between the business chamber and the cultural/arts sector as we reinvent and pivot into the future….watch this space.”

JoAnne Kilmartin from Donegal County Council’s Donegal Diaspora Project, which facilitated a number of contributions to the programme, said it provided a link to home to the global diaspora which has not been able to make that journey to Donegal to celebrate with family and friends.

She said: “It was a pleasure to have included performances from across the globe from Declan Houton, lead singer with Boston-based band Devri, to Scotland represented by Kathleen Boyle Jordan pianist with the world-renowned band, Cherish the Ladies.

“It was also a delight to include a special message from the President of the Irish Australian Chamber of Commerce, David Greene, a native of Dungloe sending his best wishes and continued support.”

The new collaboration with Highland Radio also created the opportunity to reach an audience which  would not have been able to enjoy the programme otherwise.

Fionnuala Rabbitt, Managing Director, said the station was delighted to partner with the RCC and Letterkenny Chamber of Commerce to help Letterkenny celebrate St Patrick’s Day.
She said: “The concept was an amazing success and great praise goes to the artists who gave their talent and time for this unique production. We look forward to working with the RCC in bringing future events to our listeners.”