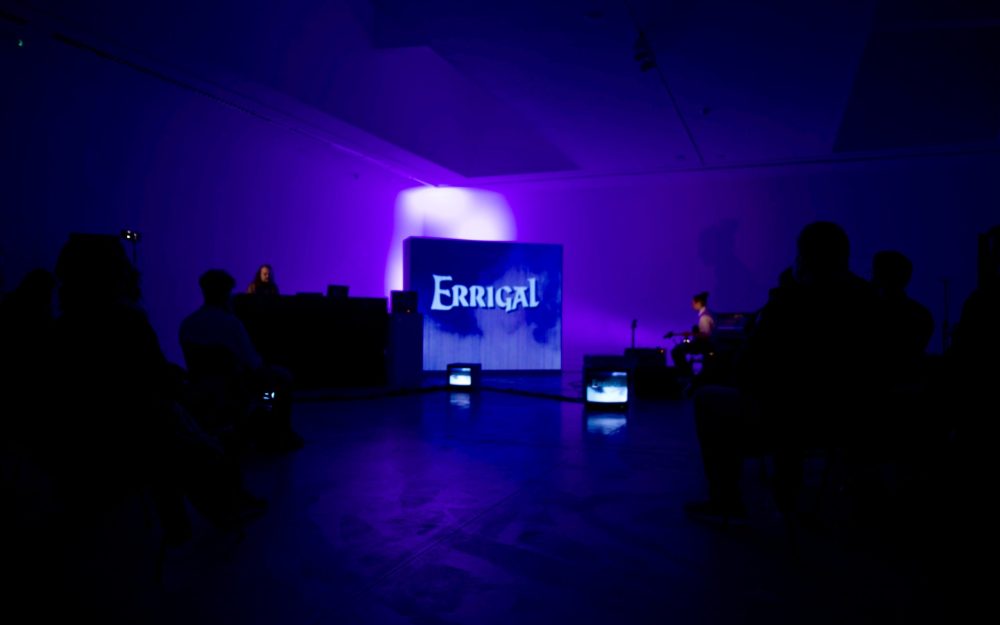 An experimental documentary on Errigal Mountain from the 1970s has provided the backdrop for new music created by two Donegal artists.

The final result was a 30-minute audience visual experience which was performed live before a limited audience and online.

Aengus Friel is an electronic ambient music producer from Inishowen who releases music under the moniker of Shammen Delly.

Peadar Coll is a much-respected Donegal multi-instrumentalist and session musician who has worked artists such as Jonathan Smeaton, indie bands Aul Boy, Lunch Machine and more.

With the support of Arts Council Ireland, the two artists were invited to join forces for a month-long residency at the Regional Cultural Centre.

Aengus said: “I was contacted by the RCC after I did another residency at Leitrim Sculpture Centre working on an installation with Gail Mahon.

“I was invited to do an upcoming residency with Peadar (Coll) whom I have known for years and is an amazing musician. I knew that once we got into the studio nice music would be made.”

This was the first-ever residency that Fintown native Coll has participated in. “I knew they existed, but wasn’t sure how to break into them, I suppose.

“When the invitation came and I heard Aengus was doing it as well, I knew it would be a bit different and thought this could be exciting,” said Peadar.

The artists said they made great strides in the first two days they got together at the RCC, said Peadar. “I was curious which direction it would take. In the first one or two days we got a lot of music done, we just kept the heads down and wrote.

“I would start something and Aengus would come right alongside. We very much jammed for the first two days and got a lot of material out of it and it seems to have worked really well.”

With a view of creating a body of work not only incorporating audio, but also visuals, Peadar and Aengus were invited by RCC General Manager, Jeremy Howard, to view a short Irish documentary on Errigal Mountain from the 1970s.

“The documentary was about 14 minutes long, which we found was a bit short, so we decided to spread it out twice as long,” said Peadar.

“We started plotting out the music that we had worked on the previous two days and found that it work out really well alongside the extended film, creating an arc or structure for the performance and gave us a framework to work on.”

Aengus said once the two artists viewed the film on Errigal, ‘everything everything started to come together’.

He said: “It was an experimental documentary in its day and the narrator sounded like Vincent Price, from a Hammer Horror Film, talking about Errigal.

“The soundscape music I make is very much inspired by the Donegal landscape and Errigal was a lovely, grainy film. The perfect one to use for this project.”

While not wanting to be too ‘on the nose’, Peadar said the visuals worked out really well alongside the music they had created during their residency.

He said: “Once we slowed it down, it changed the atmosphere all together, if we had left it as it was we would have swept bit a little too quickly. Not that we shoe-horned one to fit the other, it just worked out great alongside and provided the arc for the performance.”

Affectionately known as the ‘Northern Tape Lord’, Aengus uses a lot of old tape, from VHS, cassette and Reel-to-Reel for his releases as Shammen Delly. And this project was no different.

He said: “We used an old TASCAM portable studio for tape cassettes and an AKAI reel-to-reel for we experimented with recording stuff onto tape to see how it sound and if it suited the project.

“We were also transferring the sound onto tape ,so we could get that old sound in there to coincide with the film and give it nice warmth.”

Completing their residency, the two artists performed their 30-minute set live in front of a limited audience in the auditorium in October. Captured in a multi-camera setup, the performance will premiere in the Notions series in November.

Friel said: “Given the circumstances, there were only 20 people there, which did give the performance a nice intimate feel. But it will be nice to get the feedback when it goes out online next month/“

“I would also be interested in working with Peadar again seeing if we could tour and bring this performance somewhere else in future.”

Peadar added: “We got some good work done, in practically two days, heads down, recording and jamming and then arranging, so there is no reason, with more time, that a lot more could be done.”

Notions presents Shammen Delly & Peadar Coll will premiere with Regional Cultural Centre online (YouTube & Facebook) on Friday, 12th November, at 8pm. Sign up to our newsletter and follow the RCC on social media for reminders of this event.