The Darkling Air – In Conversation with RCC SOUNDS 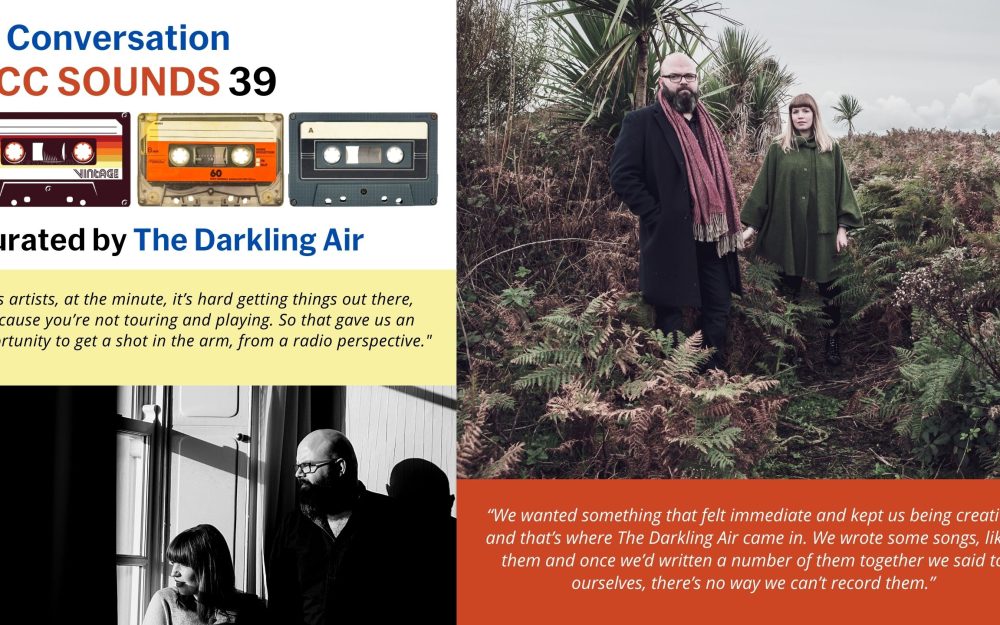 The Darkling Air have endured a year of highs and lows, but 2020 is very much closing on a positive note for the duo.

On Friday night, 27th November, Ireland will be glued to the annual highlight that is RTÉ’s Late Late Toy Show (RTÉ One, 9.35pm) in a ‘slightly’ different format to other years.

This year’s show was advertised by a heart-warming short film directed Dermot Malone and beautifully accentuated by a song written by County Down-based duo, Michael Keeney (originally from Lifford) and Rachel McCarthy, together known as The Darkling Air.

Michael and Rachel said the instrumental version of their song Globe Lights being featured in the promotional film for the annual event came as a very pleasant surprise.

Rachel said: “Our manager, Charlene [Hegarty], had been pushing the song for a Christmas sync as she felt there was a wintry, seasonal sound to it and luckily the Late Late Show got back on it.”

Unbeknownst to the duo, RTÉ sync liaison, John McCallion had already been working with the filmmakers who cut the song, in instrumental form, to the video.

Michael said: “First of all, we got an email from Charlene asking us if we’d be interested in having our song used for the ad, but at that stage we thought we were in the running along with maybe eight or nine other songs.

“But we then found out ours was the only song they were using and were sent a confidential link to the video the Wednesday before the ad came out on a Friday.”

“Dermot Malone, who directed the ad, did a really good job. It’s a lovely story. It had an emotional effect and the music was well-placed. It’s one of those rarities when that happens. It’s always a nice thing,” said Michael. Watch the film HERE

The association with RTÉ’s Late Late Toy Show and its promotional film has also brought renewed interest and publicity for The Darkling Air who had a busy year planned following the release of their second album, Ancestor, in November 2019.

“We’ve had some tweets and retweets about it, it’s been nice. And lots of crying emojis,” Rachel laughed. “It’s lovely boost to have been associated with the film. We’ve also been getting some more radio plays through the likes of Fiachna Ó Braonáin.”

Michael added:  “It has filtered through to the regional stations, as well. As artists, at the minute, it’s hard getting things out there, because you’re not touring and playing. So that gave us an opportunity to get a shot in the arm, from a radio perspective.”

Rachel said it is hard to believe that it has been a year since the duo released the follow-up to their 2016 debut album, Untamed & Beloved. “It doesn’t feel like a year as we have only done three gigs since,” she said.

Michael said: “We did three sold-out arts festival shows and then that was it, lockdown arrived. We had planned for a big run in the summer, but it didn’t materialise, obviously.

“Everyone is in the same boat and it has been a rough year for all artists. But all the more reason that something like this has been good for us.”

The week that they found out about their song being featured in RTÉ’s promotional film, The Darkling Air were also informed that they had been nominated for shortlisted in the Best Album category of the 2020 Northern Ireland Music Prize Awards. “We had a lovely little socially-distanced celebration between the two of us that week,” she laughed.

THE DARKLING AIR’S MUSIC & MERCHANDISE IS AVAILABLE ON BANDCAMP HERE

Michael and Rachel, who live in close proximity to each other in the seaside town of Bangor, first met a decade ago, and worked on various albums and projects together, including Foy Vance’s album Joy Of Nothing, recorded right here in Donegal at Attica Audio in Termon, before teaming up to write songs and eventually form, The Darkling Air.

“I had just come out of dealing with labels on three consecutive albums and while I am very lucky to be able to do that, there’s a slowness in terms of how music is released that way.”

“We wanted something that felt immediate and kept us being creative, and that’s where The Darkling Air came in. We wrote some songs, liked them and once we’d written a number of them together we said to ourselves, there’s no way we can’t record them,” Michael said.

“The weird thing is, we never really had a master plan for that reason. I think the album mix was finished on a Wednesday night and everybody said ‘What will we do now?’ and we decided to release a single that Friday and that was it, no label, management or PR, stick it out on Friday and see what happens. That was the first single, Storyline, and it grew from there.”

Rachel added: “We try to progress naturally and on our own terms as much as possible. We set out to do something that we enjoy, and get away from the noise that we were used to working with. We were very surprised to learn how easy it was to work together, so we just kept going.”

2020 will be remembered by Michael and Rachel for a lot of reasons, including the sad loss of Rachel’s mother to cancer in August, but the duo is aiming to close out the year on a real positive.

Rachel said: “It has been a tough year and hard to focus and get into that headspace for writing. But the fog has been starting to clear in recent months and we are busting to get working again.”

Michael added: “The positive out of all of this is that you do have more time to write and if gigs do slowly come back next year, we’ll be able to do some gigs and people who haven’t had the opportunity to see us live yet will get to see us perform.

“We plan to get our heads down again and keep writing and see where that takes us. We don’t know the longevity of the second record now because of everything that has happened, or will it still stretch through, but hopefully it won’t take us as long for a third record to come out.”

The Darkling Air have limited their audio visual and online output so far this year, but Michael said they have a few things in the pipeline and plan to produce some high quality materials soon.

He said: “We have a nice live show with the Arco String Quartet and projections that Rachel has built which we really enjoyed putting together.

“There is so much content that bands are making now, but it’s trying to keep the quality of that up which can be a tricky thing.

“We want to shoot something with the right production value and sounds and hope to release a live stream in the next year. Something that would work for TV, essentially.”

Michael and Rachel bring a lot of individual talents to the table which allows them to do a lot of work in-house, including video production.

While they have worked with like-minded people such as Chris Roberts in the past, a lot of The Darkling Air’s video work has been filmed and edited by Rachel.

“Rachel very much does the video end. She’ll do the concept, shoot and edit, or co-edit with Chris (Roberts). So everything we do is very much in-house and independent. The freedom of that is something we value highly,” Michael said.

“It would be nice to work with someone else down the line, and not film with a camera with a broken lens. All my equipment is falling apart, but I still manage to get something out of it.

“Every time a new video comes up I say, right this will be the last one, because my camera won’t take it anymore,” Rachel laughed.

The duo’s third video accompanying their second album, Beholding You, was unveiled around the same time as The Darkling Air hit the news with Globe Lights.

Rachel said: “We had planned to release the video earlier but like most people we had to stop working for a while, due to the lockdown.

“We finally got that finished a month ago. It felt so lovely to be creative again and it has its own personal meaning, as well.”

Rachel bought a little pond yacht for the production of the video to Beholding You and the concept was that it would eventually make its way to the ocean. A concept that this little boat took quite literally, she said.

“We’d like to draw attention to people who live along the coast, because the little pond yacht featured in the video has been lost at sea.

“It wasn’t intentional, but unfortunately we lost it and it’s still out there somewhere. It ended up being a quite poetic ending of the video for the song.”

“The idea was that the boat would eventually make its way into the giant ocean, but when Rachel filmed the last scene it took that too literally and went out with the Stena Line from Belfast Lough. So if anyone finds that boat we’d be very grateful. It might be around Fanad Head by now,” Michael laughed. Watch The Darkling Air’s Beholding You HERE

The Darkling Air have curated a wonderful playlist for their edition of RCC SOUNDS, featuring everything from Duke Special, Patsy Cline, Richard Hawley, Angel Olsen, The Gloaming, John Grant and many more. Listen to RCC SOUNDS 039 HERE