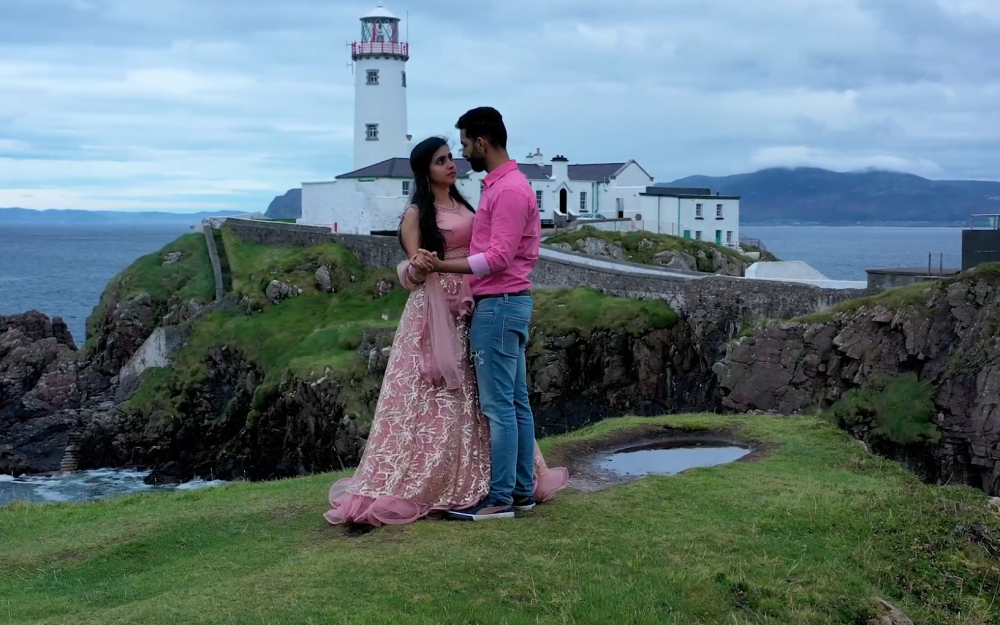 Donegal is the perfect backdrop for a love story.

A DONEGAL hobby film-maker has produced a new short musical filmed in picturesque locations around the county.

A love story with a message, Nee Jathalo is the first ever Telugu language short musical to be filmed in Ireland and features original lyrics and music composed by Raja who is not only a film-maker, but also a keen fine art photographer and musician.

After first unveiling his song during the 2019 Diwali Festival of Lights celebrations by the Donegal-based Indian community at the RCC, Raja continued his dream project by creating the new film.

Raja and his family moved to Letterkenny in December 2016 after getting an opportunity to join the ever-growing team at Pramerica.

Originally from Andhra Pradesh, Raja later settled in Bangalore – both of which are in the southern part of India.

A keen photographer for many years, Raja’s speciality is portrait photography which he does in his own studio set-up.

Over the past two years he has become more serious about his music and started composing and recording new, original material.

Last year he also started getting into film-making and having acquainted himself with the tools, started marrying all his passions into one on this project.

Ably assisted by his wife Kiranmayi in directing the filming of the musical, Raja used various locations around Donegal and Louth, including Ards Forest Park, Ballymastocker Beach, Fanad Head Lighthouse, Poison Glen, Dunlewey and Stephenstown Pond Nature Park in Dundalk. He said: “I found these locations from my previous trips and I got permission from every place before we did the filming.”

Raja not only composed the original music and lyrics, he also sang and recorded the male vocals, while the female lead was taken on by his friend, Bangalore-based Vasumathi Kannan, whom he said did a great job singing in both Telugu and Tamil.

He said: “I recorded everything in my home in Letterkenny except for the female voice, which I recorded in a studio in Bangalore.

“It was originally done in Telugu, an Indian language known as the Italian of the East, and was later dubbed into Tamil, another nice Indian language. The Tamil translation was done wonderfully by Sai Sankar Shanmugavel.

“It will soon also be translated into Hindi. But the film also has English titles, so that all of us can enjoy the meaning of the musical.”

The main screen protagonists in the musical are real-life husband and wife, Karan and Konica Khanna (pictured above at Fanad Lighthouse), whom Raja met while they were working in Pramerica.

Raja said he is already working on his next projects, but in the meantime, please enjoy his first venture into musicals with నీ జతలో Nee Jathalo (In Your Presence) HERE.

If you would like to watch the TAMIL language version of Nee Jathalo, உன் உறவில் CLICK HERE