Rory & The Island – In Conversation with RCC SOUNDS 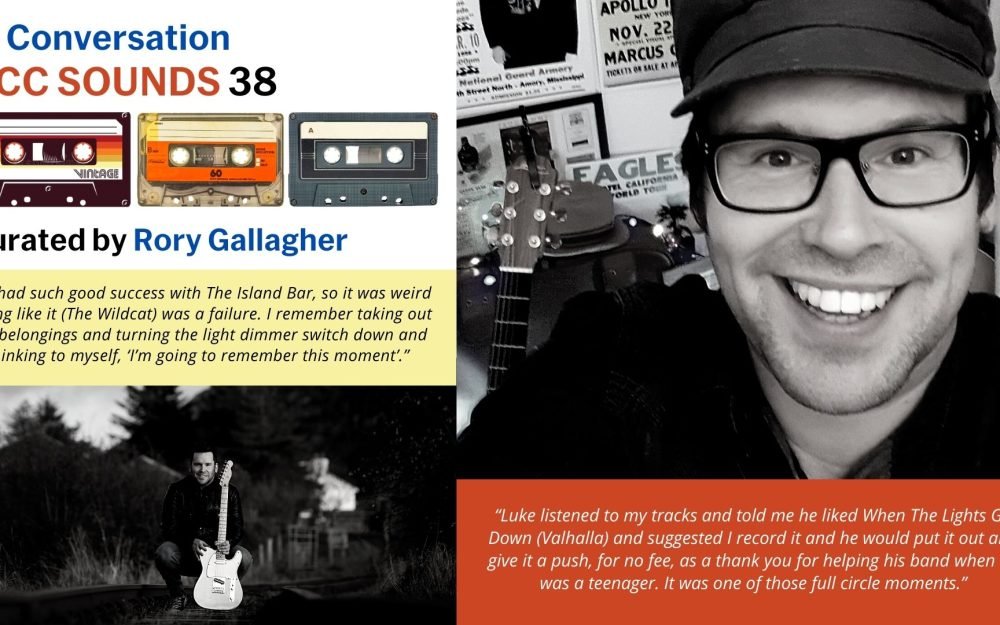 Rory & The Island is finishing the year on a high.

Rory & The Island has just released a brand new single hitting airwaves at home and abroad, continues to lift spirits online… and has big ‘Revs’ news to share!

This has been a tough year for the whole world, including well-known Donegal man Rory Gallagher who first burst onto the Irish music scene with his band The Revs nearly 20 years ago.

A year that started with a major blow to the Kilcar man and his family, is ending on a real positive note, in part, thanks to old friendships being rekindled and a little payback.

Early this year, Rory, his wife Cara and their two boys took up the opportunity to take over the lease of a live music venue in Edinburgh’s city centre, leaving a very successful business in the famed Island Bar on Lanzarote behind.

Four days before the official opening of The Wildcat, the Gallaghers were forced to close the doors before their venue really even opened, when the coronavirus pandemic hit the world.

“We decided to hold on as long as possible, but three months into it the landlord was saying the rent was being frozen, but not being written off. So the longer we held off, the more risk there was of ending up in debit. So we handed back the keys.”

Rory had first moved to Lanzarote when The Revs had called it a day and after performing in various venues for a number of years, decided to open up The Island Bar with his now wife Cara turning it into a hugely successful venture.

“We had such a good success with The Island Bar, so it was weird feeling like it (The Wildcat) was a failure. I remember taking out our belongings and turning the light dimmer switch down and thinking to myself, ‘I’m going to remember this moment’.”

Of course the couple never got the chance to open the venue through no fault of their own, but the experience sparked an idea, and a line in the Kilcar man’s mind, ‘it’s never easy when the lights go down’, which led him to writing his latest single.

He said: “When you’re finished in a theatre and the lights go down, you’re never as happy as you are on stage, or you get that after performance depression. When The Lights Go Down (Valhalla) is about that mood really.”

Rory, who performs and releases under the moniker of Rory & The Island, admitted he may have felt more comfortable in promoting his more mainstream material in the recent past.

“I’m always one for probably pushing the chirpy, gimmicky songs and not having the confidence of pushing the deeper stuff. I suppose being Irish you feel embarrassed, easily.

“It’s a shame, because a lot of people would say they like songs of mine like Waterfall, Call My Name, and probably connected better with some of those types of songs.

“But it’s just easier, when you’re doing live things, to do songs like The RyanAir Blues, Jimmy’s Winning Matches, Colours, Getting Locked in a Lockdown and so on. You tend to get lost in the craic sometimes,” he said.

While he kept very busy with online performances throughout lockdown, which he is still doing regularly on Facebook and Zoom, Rory also found time to write and as a result sent a number of demos to various music organisations.

The songs Rory wrote also ended up on the desk of a young music executive in London called Luke Bunce of LAB MGMT, whom the Kilcar man has known from a young age.

“Luke grew up on Lanzarote and when I first moved there, I went into a studio and helped produce some demos for the punk band he was playing drums with.

“He was only 16 at the time, but Luke went on to go to university in London, study the music business, worked his way up the ranks and is now working with a lot of R&B acts.

“Luke listened to my tracks and told me he liked When The Lights Go Down (Valhalla) and suggested I record it and he would put it out and give it a push, for no fee, as a thank you for helping his band when he was a teenager. It was one of those full circle moments.”

In another ‘weird’ coincidence this year, Rory had also just rekindled his friendship with a pal from his Ballyfermot Rock School days in the late 90s.

“Josh (Worthington) and I were great buddies at the time, but we drifted apart, as you do sometimes. We had just reconnected and it turned out that he runs his own recording studio in his native Yorkshire. So I drove down there to record, when we were allowed to travel.

“I was in my element. I had really missed playing drums and bass as always I was playing in my spare room was the guitar. We recorded the song all in one day, mixed it, and sent it down to London and Luke put it out. And that was only three weeks ago.”

Turning 42 in the coming weeks, Rory said he is no longer chasing that major record deal, but is happy to continue recording and releasing original material, while also focussing more on writing songs for other artists.

“The support for my latest single has been great with airplays all across Ireland, including RTÉ Radio 1, and of course Ocean FM and Highland Radio.

“Thanks to Luke it is also being played on various radio stations around the UK and just yesterday was played on a Seattle Rock Station, places I’ve never been played before.”

“In terms of general publicity it has also been great. 15 years ago there was maybe NME and Mojo, and Hot Press here in Ireland, but now there are so many more outlets, and bloggers!”

Rory’s collaboration with Luke Bunce has also led to his old band, The Revs, deciding to release their back catalogue onto Spotify for the very first time this Christmas!

“We are releasing The Revs Box Set, featuring 46 remastered songs, on Christmas Week. The Revs have never put anything online, but with Luke’s encouragement, we decided to go for it.

“As he said, we have nothing to lose doing it, and who’s to say our music won’t be introduced to a whole new audience that way and put back in people’s consciousness,” he said.

Rory plans to continue working with Josh in Yorkshire in the new year and potentially team up with some other songwriters in the near future.

The singer isn’t coming to the game with a blank CV, either, with the likes of Eurovision winner Paul Harrington, Wallis Bird, Sharon Shannon, Finbar Furey and other acts in the UK and United States having recorded material he has written and co-written.

“That’s the dream now, and a goal for next year. The main thing I am going to concentrate on now is songwriting for other people, working with other writers, recording in Yorkshire and pitching them to young artists and labels that are looking for songs.”

Rory said performing for the public on a weekly, and then daily basis, through Facebook Live and private Zoom parties, kept him going in more ways than one.

He said: “I kept getting all these lovely messages thanking me for gigging, but it was much more selfish than that, that was my buzz for the week.

“It gave me something to look forward to, I just don’t know how I would have done those seven or eight months without it. I felt the public carried me through this year. Every week I would get a little bit more confident and try different things and would get great encouragement.

“To be able to do a set that was 60 per cent original, and treat it as a party gig, and people not leaving, for me was amazing.

“Even if the pubs are open again and things are fine, which I have a good feeling will be soon, I think I’m going to keep the Facebook thing going, even every second week, until I know when it’s time to call it a day. If they maintain at anywhere near where they are now, I’d be crazy to stop it.”

Rory said doing private performances on Zoom was another means of ‘keeping the wolves from the door’ that he was very grateful for and kept him in touch with people.

“I did everything from 21st birthdays to wedding anniversaries and the beautiful thing about it was, families would be joining each other from all over the world. At the height of lockdown, I was doing maybe six Zoom gigs a week, so it really kept me occupied and the wolves from the door.

“You could be looking at eight different groups of people from Auckland, New Zealand, Donegal, Sydney, New York to Galway, all on the one call.

“It was such a nice feeling seeing them dancing around their living rooms and it felt more like I was used to. I think I’ll try and make them even more special though. ”

“It was a really great concept and the atmosphere was nice. This whole year has been a learning experience. It’s a whole new world,” he said.