THE doors of the Regional Cultural Centre Letterkenny may be closed, but behind the scenes staff has been working on numerous initiatives to lift people’s spirits, have fun, inspire and all the while support the arts during this much-needed time.

As a result, the RCC is delighted to present its first ever full online programme for Spring 2020 boasting initiatives for all ages.

Arts centres around the country are playing an important role within their communities during this difficult time and here in Donegal, the RCC team is committed to continuously adapting and being proactive in supporting its community, further afield, and the arts.

HOME IS WHERE THE ART IS

The first initiative launched, just two days after the RCC closed its doors to the public, was the ‘Home is where the Art is’ Youth Art Challenge.

Now in its fourth week, and part of the wider RCC for Kids Youth Engagement Programme, over 5,000 families from not only Donegal, but around Ireland and the world are participating. Well over 20,000 pieces of artwork have now been submitted in the ‘RCC for Kids’ Facebook group.

It is envisioned that ‘Home is where the Art is’ will result in a major exhibition at the RCC once this is crisis all behind us.

The RCC launched its first ever Virtual Artist-in-Residence Programme last month, beginning with the inimitable Little John Nee who this Thursday, 9th April, gives his third weekly performance on his Facebook Page at 8pm. The programme was started to support leading Irish artists from multiple disciplines during this difficult period and just this week the RCC announced its second Virtual Artist-in-Residence, Sculptor Redmond Herrity. 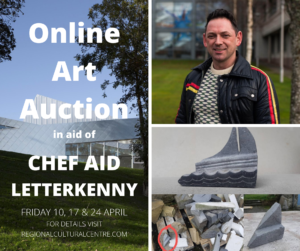 As part of his month-long residency, Letterkenny native Redmond will document the process of creating three new small-scale stone sculptures that will be each auctioned online by the RCC with all proceeds donated to Chef Aid Letterkenny. Online auctions will take place on the Regional Cultural Centre, Letterkenny page on Friday 10th, 17th and 24th April.

Redmond  has exhibited at Dublin’s Royal Hibernian Academy (RHA) Annual Exhibition for the last 14 years. In 2009 he was awarded the Conor Moran prize for Sculptor of the Year while in 2013 he won the Glebe Gallery Derek Hill Prize. In 2019 Redmond won the Morgan O’Driscoll Award for Outstanding Sculpture at the Royal Hibernian Academy, Dublin.

Chef Aid Letterkenny is a voluntary service set up by Letterkenny CDP and the Honeypot Café to provide hot meals to elderly and vulnerable members of the community in and around Letterkenny during the COVID-19 crisis. Letterkenny C.D.P. is a registered Charity (CRA 20062460). 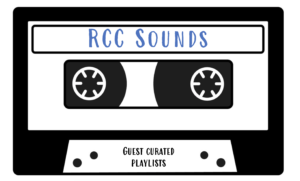 The RCC team has also tasked a mixture of local and national musicians to each curate a playlist under a theme of their own choice.

This community mixtape, lovingly selected by musicians to help keep you company during this period of unknown, will be released every week.

Previous playlists, all available to listen to on Spotify, have been curated by John O’Neill of The Undertones, Gabriel Paschal Blake, a member of one Ireland’s leading alternative music acts, The Murder Capital, and well-known Fintown musician, Peadar Coll.

The RCC asked the The Glebe House and Gallery in Churchill to curate an art challenge for adults. Every Tuesday The Glebe posts photographs of a still life set up using items from the Derek Hill Collection on its Facebook page.

At the end of the week it posts photos of your artworks on The Glebe House and Gallery Facebook page. The challenge is now in its fourth week and you can use any medium you like.

Please have fun with this and be adventurous, e-mail jpegs of your drawings to glebegallery@opw.ie

The RCC asked Donegal residents to help them document their outdoor social distancing adventures in Donegal (while following social distancing guidelines, if you do leave the house) and hundreds are participating. Even within a two-kilometre radius around your home there are beautiful settings and you can share this experience through your photography.

Participants are sharing their images in the Remote Inspiration Facebook Group and on Instagram using the hashtag #remoteinspiration. A selection of submissions made during the challenge will be also printed and exhibited at the RCC in the near future.

With so many people sharing their talents online, the RCC team created the ‘Ceol agus Quarantine’ group on Facebook aiming to help promote musicians, storytellers and poets doing live streaming sessions during. The team would be delighted to hear from you if you have any ideas or would like help promoting content! Come join the other over 1,000 members in Ceol agus Quarantine!

For further information on the Regional Cultural Centre Letterkenny’s Spring 2020 Online Programme, click on the above links (headlines), browse our website and follow the RCC on social media!