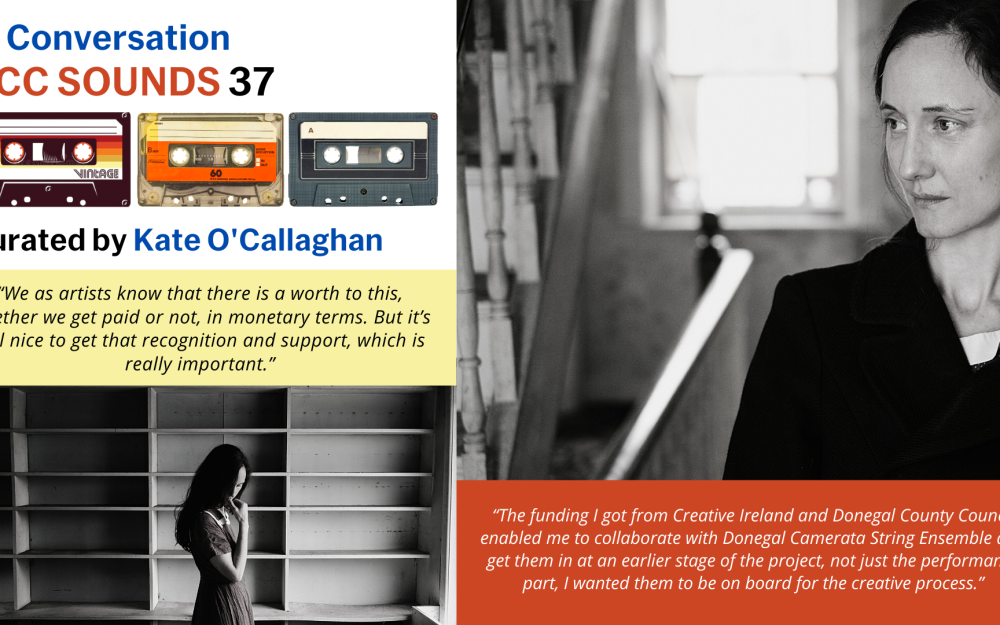 Kate O’Callaghan continues to develop a musical project inspired by her Dublin great-grand aunt and her involvement in a significant time in Irish history.

The Inishowen-based singer is one the artists to have received support under Donegal County Council’s recent Artists’ Bursary Scheme.

During these uncertain times, Kate has said she is grateful that there are various funding opportunities for artists available.

Having kicked off her solo career with her debut EP, To You, and debut album, The Still Beyond, Kate has delved into her family history with her most recent music projects.

In 2016, Kate released the concept album, The Girl with the Beret, which comprised of a series of songs and spoken word tracks inspired by her great-grand aunt, Catherine Rooney (née Byrne) and her witness statement to the Irish government’s Bureau of Military History, detailing her involvement in the events of Easter 1916 in Dublin, and the subsequent War of Independence.

Kate always knew that her great-grand aunt Catherine’s story would not fit into the one concept album. “Leading up to the 1916 album, I quickly realised that I wouldn’t be able to fit all of Catherine’s stories onto The Girl with The Beret.

“Following the 1916 Rising, she went on to Scotland, running guns back to Ireland, and was later also involved in The War of Independence. So as soon as I had the 2016 concept album done, I started the workings on the next part of her life story.”

The new song cycle sees Catherine and her wider family, including her sister and her mother, deeply involved in the events of the War of Independence.

From organising gun-running expeditions from Glasgow, to assisting with intelligence work, planned prison escapes and the disposal of documents, including papers captured following the IRA assassinations on Bloody Sunday.

The work is essentially a reflection on the seemingly ‘small behaviours’ of ordinary women, which ultimately affected far-reaching social change over time.

Unlike The Girl with The Beret, which was first recorded and then released with a number of live performances, Kate’s original plan on this occasion was to perform the new concept album, entitled Small Behaviours – Songs from a Witness Statement, first.

This was due to the fact that the singer was awarded funding from both Creative Ireland and Donegal County Council to work on the follow-up album to The Girl with The Beret.

She said: “I received funding to write, compose and create this next part, which was really nice for me, because I felt for the first time that there was a value put on creating the work.

“Normally, a lot of us singer/songwriters and musicians who are creating original work are lucky if you get some kind of payback from it.

“But to actually get financially supported in the creation of it, that really puts a value on it and it really helps you, and makes you feel like there is a worth to this.

“We as artists know that there is a worth to this, whether we get paid or not, in monetary terms. But it’s still nice to get that recognition and support, which is really important.”

The other thing, Kate said, the funding enabled her to do on this occasion, was to collaborate with  other artists and musicians in the creative process.

“I’ve been collaborating with other musicians and creators for years and for The Girl with The Beret live performances, we were joined by Donegal Camerata String Ensemble.

“The funding I got from Creative Ireland and Donegal County Council enabled me to collaborate with Donegal Camerata String Ensemble again, but get them in at an earlier stage of the project, not just the performance part, I wanted them to be on board for the creative process.

“We had a series of creative sessions where I was able to present my songs, which were again inspired by my great-grand aunt’s witness statement, and again (like The Girl with The Beret), it’s a concept album which flows from one song into the next and brings you on a journey.

“To do that there are musical interstices which bring you from one song to the other. And so we had creative sessions facilitated by my husband Seamus (Devenny), who is very experienced in facilitating processes like this, Most people would know him as a musician, but he also has a huge amount of experience as a music facilitator.”

“The last time Seamus composed all the string parts, but this time we worked on sections together with Donegal Camerata. Each one of those members would give their input individually, based on the story that I told them.

“At one point there’s a song all about her return from Scotland, smuggling arms into Dublin Port, which goes into the next about her underground activity in Dublin. So how do we bring her back from Scotland, musically?!

“We were trying to paint this picture and, for example, Victor Yélamo [cellist and director of Donegal Camerata], at one point created these lovely, low cello notes that sounded like a big fog horn on a ship coming into dock. The sessions were wonderful, really enjoyable, and some of the material that the group came up with was just fantastic.”

The musicians were all set to premiere the new material in 2020, but live performances were rescheduled no less than three times, the most recent postponements being two gigs during the Donegal Bay & Blue Stack Festival.

“We’ve been stalled on so many attempts to perform the new material this year and there is so much organisation that goes into it every time.

“We were so close to performing it at the The Abbey Arts Centre, Ballyshannon and An Grianán Theatre, Letterkenny, which I was really excited about. Now everything is just up in the air and it’s so hard to plan anything,” she said.

With the uncertainty of live gigs, an optimistic Kate said she is definitely considering moving on to the recording process in anticipation of hopefully performing her second concept album live in the near future.

“There’s a lot of funding and support out there now, from various organisations, so there is hope and possibility.

“I am getting great support from Donegal County Council and was just notified last week that I have been awarded a bursary and all of that really, really helps!

“Hopefully in the new year we will try and get into the studio in spring and get the whole concept recorded. And then, if things start to lift and we get a bit more freedom, in terms of performing, we will get to perform it live.”