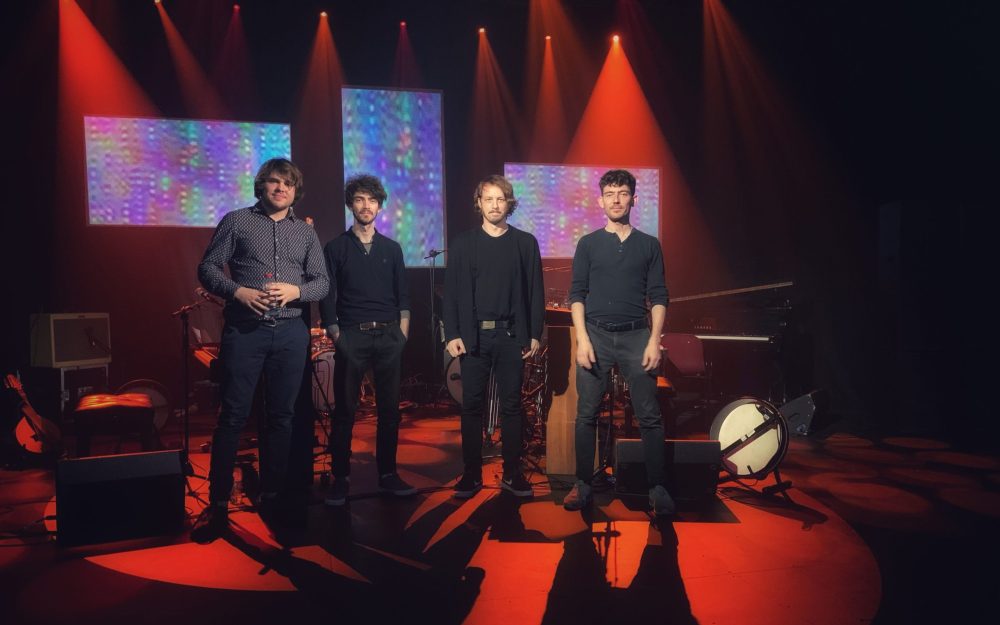 TWO Irish artists delved into the world of medieval Irish mythology for a recent collaboration which has been recorded at Regional Cultural Centre.

Philip Christie (O Emperor, The Bonk) and Ronan Kealy (Junior Brother) this month recorded works created during a recent residency at the RCC.

The Dublin-based musicians returned to the venue to perform and record what they created during a week-long stay at the centre as part of their participation in the RESONATE: Music Network Artist Residencies Programme.

The recorded performance will premiere online at a later date, so make sure to follow us on social media and subscribe to our newsletter for updates.

Waterford native Christie and Kealy, originally from Kerry, were two of six musicians appointed to this major new initiative which provided financial awards and a range of additional supports to facilitate the making of new work and creative partnerships.

“Myself and Ronan would have crossed path at various gigs over the past few years, playing on the same bill,” said Christie.

“From the first time I saw Ronan play live I was really interested in the music and was struck by the things he was interested in, as well, like how time is treated in music and what he is doing with traditional ideas, taking folk influences into a certain direction. We had only had a few chats here and there before I approached Ronan with the idea to try this project.”

The artists collaborated on an exploration of music for two voices, guitars and rhythm using stories about a mythohistorical group of people, the Fir Bolg, as their inspiration.

They developed an imagined traditional folk music, intertwining their voices to mimic the sounds of duophonic singing, a technique where one individual produces two strands of melody simultaneously.

Kealy said: “I had never done any collaborations before, and I think Phil was the same, so it was new for the both of us. I would be a big fan of The Bonk, and O Emperor back in the day too.

“I always thought we were in a similar lane, in some ways, so a collaboration made sense, especially with the whole theme he came up with. It fitted in nicely with stuff I was getting into over the last while, especially during lockdown.”

Mythological characters, such as the Fir Bolg, the prehistorical stories of Ireland, and music that would have been around during this time, pre-dating today’s Irish traditional music, are something Christie has been interested in for a long time.

He said: “Representations of Ireland that are hard to even relate to in some ways, they’ve always interested me. In the first conversations we had we were talking about what the music would sound like and one of the notions that I had was imagining the possibility of duophonic voices from one body, being able to sing two melodies.

“One of the original musical ideas of the collaboration was that it would be a simple pairing of voices, playing with lines that converge and diverge in less familiar harmonic ways.

“It developed from there. Once you get started, other things emerge as you move along. The voices have stayed there as a feature throughout what we have come up with, though.

There is not very much text in it, in terms of lyrics. We ended up gravitating towards non-lyrical ways of singing and humming; A new thing to look into.”

Kealy said one of the most interesting parts of the whole project was planning towards a live performance. “That really helped in getting work done and was a big motivator of really tightening things up and making sure one piece flows into another. It really helped solidify the whole thing.

“We are planning on bringing in two other musicians on drums and wind instruments for the live performance, which will be exciting, just to add more characters to the sound and create the world we spent the week dreaming up.

“Because it is going to be in front of an audience, we are also thinking about the performance visually. It has made us think of things in a slightly different way, as opposed to if it was just an album, or recording.”

With residency and performance recordings at hand, Christie said it would definitely be interesting to develop the project further.

“It’s the first time that either of us have done a residency like this and it was cool to go into a week and come out with some sort of body of work. It would be cool to see how it goes.”

Meanwhile, Christie and his duo The Bonk are also currently working towards their second album release, and will be publishing their next single after Christmas.

Kealy’s latest single, Life’s New Haircut, under his moniker Junior Brother, is out now digitally and on limited edition 7” vinyl. He will also be performing at Whelan’s in Dublin on 26th November.

Philip Christie and Ronan Kealy’s RESONATE performance will premiere online at a later date, so make sure to follow us on social media and subscribe to our newsletter for updates.