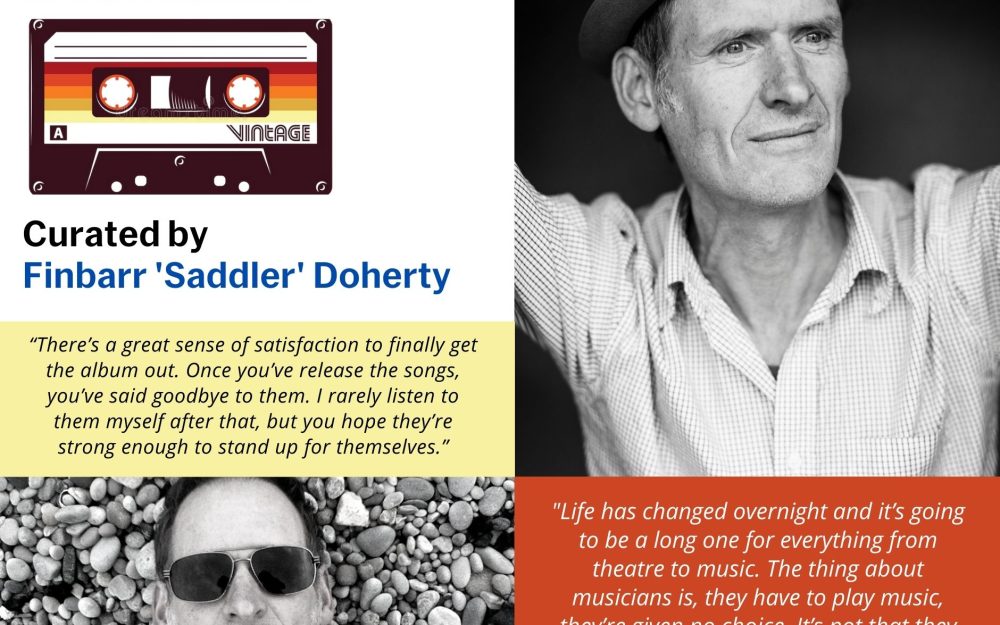 The album’s title, Chapel Street to Somerville, is a reflection of that time, marking the Carndonagh street Finbarr lived on when he and his wife Denise got married to the city of Somerville, Massachusetts, northwest of Boston, where they lived for seven years.

The songs featured on the new album precede, or didn’t make the cut for his first two albums, Across The Water (inspired by Clonmany teacher Patrick Kavanagh’s collection of stories, The Last of The Name) and Skyscrapers, released in 2011.

He said: “Wherever I have lived, I’ve always had a wee home studio, even from the days when I was young and still living with my parents.

“This album features songs I started recording when my wife [Denise] and I were still living on Chapel Street in Carn, and including our time living in Boston, Massachusetts.

“So a lot of them began on cassette and mini disc, travelled to the States with us, and then went from analogue to different digital formats before returning to Donegal.”

Finbarr said it was good friends such as Paul McCarroll and well-known musician Billy Robinson, who has mixed and mastered all of his commercial releases to-date, that encouraged him to release this collection of songs.

“A good friend of mine, Paul [McCarroll] kept gently nudging me a long time to get this completed, while Billy [Robinson] has always been very encouraging.

“I can’t help but smile thinking about the time we were mixing the album and Billy told me to follow him to his car and we listened to the album while driving around his house.

“Billy said hear the music far better when the engine is running,” he laughed, “Billy has an amazing ability to enhance whatever is there.”

“What ever he [Billy] got came from very humble beginnings, and recording equipment, because I am a DIY musician and everything I record is done wherever I am at the time, featuring sounds from different rooms and instruments. It’s an unorthodox approach, but I love the challenge.”

One man who deserved a special mention, Finbarr said, was his brother-in-law Campbell Owens (of 80s band Aztec Camera fame) who has played bass on all three of his albums.

“Whenever Campbell is visiting we spend very pleasant days drinking coffee and recording bass lines on songs. He has always been a constant companion on all the music I have done.”

Finbarr had, of course, planned to launch the album with a physical concert. “I had planned to do a launch at the Colgan Hall here in Carn. We were literally getting ready to send out the invites and sure everything shut down and like everyone else I had to abandon that whole idea.”

Instead, he took the launch online, sending out press releases and marking the launch with the release of his first single, Close Encounters, and accompanying video, recorded in Dublin City Centre while his two teenage daughters were at a concert in the O2 Arena before the country’s first lockdown.

“There’s a great sense of satisfaction to finally get the album out. Once you’ve released the songs, you’ve said goodbye to them. I rarely listen to them myself after that, but you hope they’re strong enough to stand up for themselves.”

CHAPEL STREET TO SOMERVILLE (AND ALL PREVIOUS RELEASES) ARE AVAILABLE FROM FINBARRMUSIC.COM

One of the ‘Saddlers’ of Inishowen, Finbarr is well-known in north-west music circles and further afield, starting out singer with 33rd Hurricane, who charted nationally in the early 90s with their single Shotgun Blast, playing the Boston coffee house scene, and touring at home in Ireland.

From performing original material with 33rd Hurricane, to teaming up locally with his friends The Henry Girls to play the pubs and clubs as The Henry Saddler Band, Finbarr really delved into the acoustic realm when he moved to Boston, falling into a very noteworthy scene.

Finbarr started playing the coffee houses and then I was featured on a compilation album called One Night In Cambridge, alongside none other than renowned singer/songwriter Mary Gauthier.

Finbarr also met musicians Ry Cavanaugh and his partner Jennifer Kimball on the Boston circuit and they would later move to Inishowen for a number of years, also bringing over the group Session Americana with whom they performed around Donegal and Ireland.

Writing is an ongoing process for Finbarr and he can be found constantly scribbling down notes or recording pieces on his mobile phone.

He has found his work life balance, something that Finbarr said is very important, especially during these testing times for musicians.

While he teaches guitar and performs at wedding ceremonies (when government restrictions allow), Finbarr still feels like he is ‘cheating life’.

“You have to have a whole lot of irons in the fire. I always have things lined up that keep me ticking along. I still love picking up the guitar and often feel like I am cheating life as it doesn’t feel like work. I’m very fortunate in that way. I don’t dread it!”

Having read through previous features in this series, Finbarr said he got a great sense of what musicians are going through at the moment.

“Life has changed overnight and it’s going to be a long one for everything from theatre to music. The thing about musicians is, they have to play music, they’re given no choice. It’s not that they can’t do anything else, they’re made to do this and it’s what makes them happy. And I think that’s going to be tested as musicians try to navigate through this while gigs are gone for the moment.”

Finbarr Saddler has chosen an RCC SOUNDS playlist of epic proportions, featuring a lot of storytelling classics that will keep you company some evening.

“I have to say, when the RCC asked me to do this, my wife Denise came into the room and said ‘you know, you don’t have to listen to the full song of each of those there,” he laughed.

“I really enjoyed this whole process. It was like a kid being sent into a candy store and asked to pick. The first song (Neil Young & Crazy Horse – Thrasher), I had that on vinyl and was just saying to my girls, when I was their age, whenever life seemed to be coming in on top of you, I used to regularly go into my parents’ front room and put the needle onto this song.

“I would lie flat on my back on the sitting room floor and let the song ooze over me and soothe me. After that I usually got up and I felt a lot better. It did something for me, I can’t even explain what it is. Sometimes, when you don’t find answers, music can be a great friend and can give you comfort.”

Another ‘powerful’ song in Finbarr’s playlist is Song to The Siren by This Mortal Coil. “There’s just something hypnotic, other worldly and mystical about it,” he said.

“Sometimes I don’t necessarily need to know what the song is about, but it can give you a calmness and connection to something.”

Brownsville Girl by Bob Dylan makes you feel like you’ve watched a movie, Finbarr said. “It’s very cinematic, huge and epic! Do I really know what it’s about? I actually don’t want to know. It just gives me great imagery, I can visualise it when listening to the song.”

Other artists featured in Finbarr’s playlist include incredible lyricists such as Randy Newman and Shane MacGowan and artists that will make you dance around your kitchen, like Gladys Knight & The Pips with Midnight Train To Georgia and more.