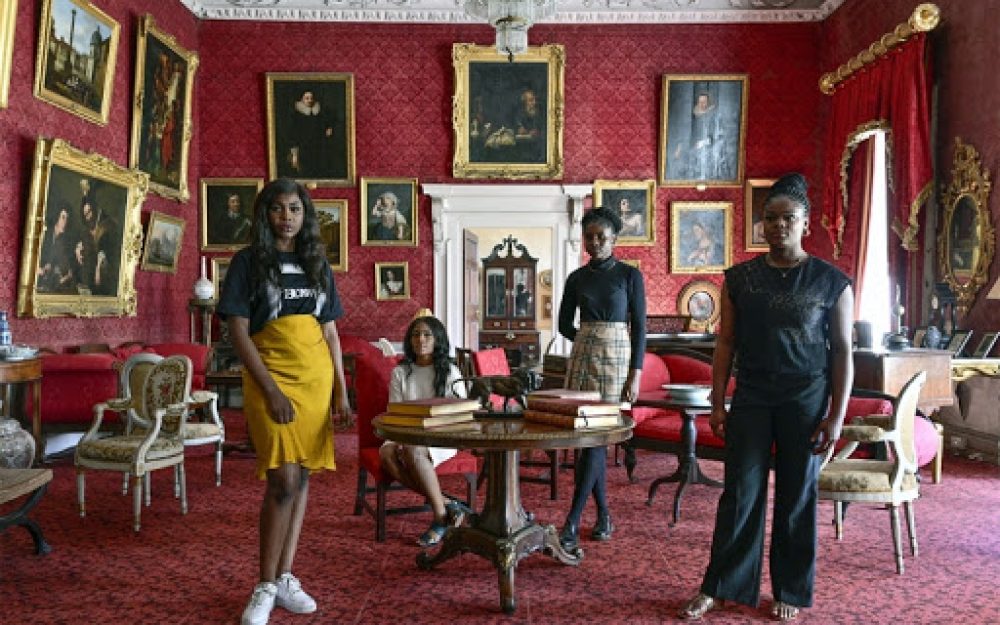 This visual art ‘journey’ will traverse through Donegal’s cultural landscape via a multi-venue exhibition featuring Irish based artists exploring the societal shifts that shape our collective identity.

Turas will run from June to September 2021 as part of the national ‘Colmcille 1500’ celebrations and present current work from a selection of established and emerging artists, chosen to represent a wide range of contemporary practice throughout Ireland.

Anthony Haughey is an artist and a lecturer in TU Dublin where he co-founded the Centre for Socially Engaged Practice Based Research. His artworks are represented in many important national and international public and private collections. In 2018 he was awarded a Fingal County Council Infrastructure public art commission together with his long-term collaborators The Global Migration Collective. In 2021 the resulting collaborative artwork, a film trilogy – Assemble was installed in RCC Letterkenny for the exhibition Turas. In 2020 The National Gallery of Ireland acquired his artworks Settlement and Citizen for their permanent collection. In 2021 he was awarded an artist residency with Artlink Fort Dunree.

Celina Muldoon is an artist based in Northwest Ireland. Central to her practice is an investigation into the complexities of living within fringe territories. Living on the border between North and South Muldoon explores themes of Identity, memory and surveillance between socio-political structures and the body. Muldoon particularly focuses on border territories both physical and metaphorical striving to identify and consolidate the emotional, psychological and long term effects of existing within this precarious environment. Her work spans Live Performance, Film and Installation. She uses collaborative processes to test live performance methodologies in response to site and context. Her unique Live Installations and videos generate uncertainty through satire and wit. Critical triggers of Muldoon’s live work rely upon audience participation and interaction. Audio and live installation elements work in tandem to manifest highly charged emotional experiences unfolding momentarily in real time.

With a particular focus on the intimate space and the analysis of the body as representation of political agency, her work is realised through sci-fi re-enactments of mythological narratives. Often what arises through her Live Performances is a deep emotional connection between participants and the audience. Her primary motivation is to cultivate moments of magic and fantasy. Within this surrealist environment she conjures human connection with the viewer and strives to promote a collective sense of tolerance, compassion and empathy.

Sarah Lewtas lives and works in Dunlewey, Co. Donegal where she has lived for the past 40 years. Originally from Sussex, Sarah studied fine art at Eastbourne College of Art and Design before she moved to London to complete a B.A. in painting at St Martins. Over the last three decades she has focused on sculptural installation while continuing with an ongoing drawing practice and recently botanical painting. She has been involved in numerous international exhibitions and symposia. Her recent work has explored the residual echoes that remain present after death.

Ursula Burke is an Irish artist who works within the discipline of Sculpture. She uses a variety of media including porcelain sculpture, embroidery sculpture and drawing. Her work explores abuses of power in many realms of the social and political in the West. Often, taking a Northern Irish context as a critical point of departure from which to generalise her approach outwards to international concerns. Formally, her work appropriates tropes deeply invested in the Classical, and re-inserts them in the contemporary, aiming to create a conceptual bridge between the Classical ‘ideal’ (in form/society) and the ‘reality’ of contemporary post-conflict Northern Irish society.

Burke’s most recent work – A False Dawn, brings together a suite of work that seeks to investigate the experience of insecurity, fast becoming a universal condition as we struggle to subsist in an impoverished and increasingly unstable civil society, in which personal solutions are prescribed to global problems. Whilst her work is born out of a context of contested spaces, identities and borders her work also looks outwards towards Brexit and Trump politics and the global phenomenon of a rise in Populism; posing questions in relation to the success or failure of the political enterprise. The concept for new progressive politics to take shape, with many false dawns is redolent in this body of work.

Each imperial dynasty, particularly in roman history, sought to emphasise certain aspects of representation in an effort to legitimise their authority. Using Parian porcelain, famed for emulating the carved marble sculptures from Antiquity, Burke’s work adopts visual tropes and surviving fragments of the Classical tradition. Many of the figurative sculptures reveal bruises or wounds on the surface, in an attempt to destabilise conventions around the classical ideal in form. Rather than enshrine the heroic or powerful, they aim to capture the darker side of revolution and conflict, formalising violence caught at a moment in time.

AE86is a metaphorical vehicle for understanding the back roads of rural Ireland as a theatre for vernacular culture and escapism. The work is titled after a popularised automobile prominent in Irish car culture, the Toyota Twin Cam AE86. The work examines the use of cars and the backroads of Donegal as a stage where one performs acts such as drama, play or destruction.

Cliodhna Timoney is a visual artist from Donegal, her practice encompasses image-making, sculpture, installation, video and sound. Timoney graduated from Visual Arts Practice , IADT Dun Laoghaire in 2015 and the MFA in Fine Art Sculpture from The Slade School of Fine Art, London in 2020. Timoney was recently awarded The Felix Slade Scholarship 2018-2020, The Claire Winsten Memorial Award 2020 and The International Atlantic Residency Exchange Award 2021. She is currently a resident with The Fire Station Artists Studio’s Dublin through the FSAS Residential Award 2021-2023.

Talamh Buan is group exhibition thatconnects the work of six painters of contrasting styles that have each settled in County Donegal from other parts of Ireland and beyond. Featuring a mix of new and old work by Heidi Nguyen, Mantas Poderys, Brian Byrne, Paul Hallahan, Ian Gordon and Liz Doyle.

‘This is normal’ by Paul Hallahan

Available to watch on gallery monitors.

Directed by Keith O’Grady and produced by the Regional Cultural Centre, Border Tales’ is an oral history film that deals with people’s experience of ‘the troubles’ in the Northwest of Ireland, as they remember it. The stories are personal to each one, and their experiences are sometimes similar, and sometimes vastly different.

It comes from a wider project run by the RCC called ‘Northwest Border Stories’ that involved primary school-aged children from Donegal, Derry and Tyrone being trained in documentary techniques and conducting interviews with grandparents about their experience of the troubles.

This project has been funded by the EU’s PEACE IV Programme, managed by the Special EU Programmes Body (SEUPB).

This exhibition has been supported by Arts Council Ireland, Creative Ireland and Donegal County Council.