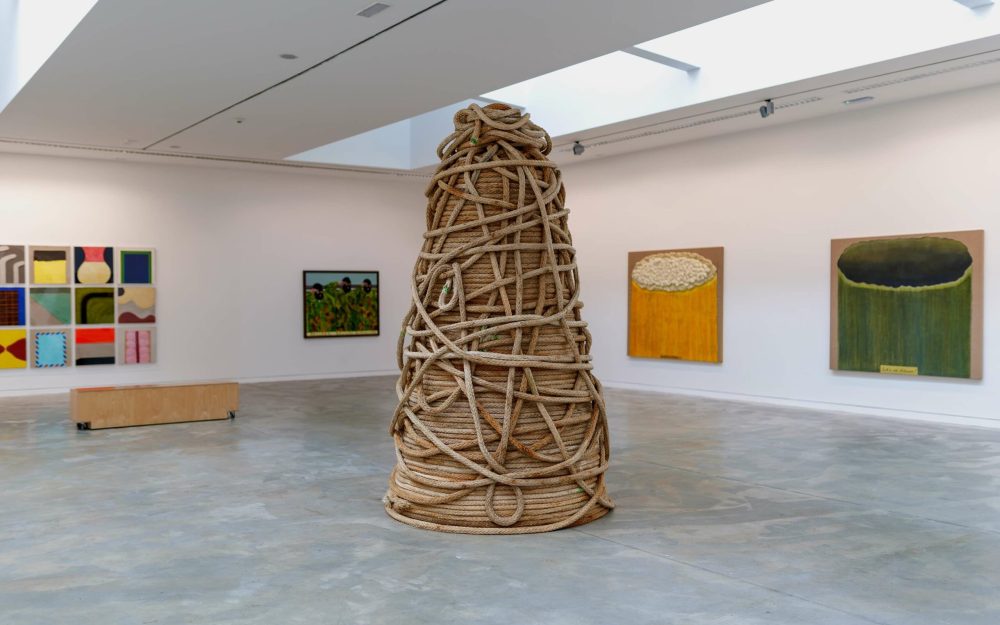 Philip Moss presents a large-scale exhibition of new and recent work, representing a range of inspiration that has impacted his work to date.
When Moss was a child, he spent two and a half years in hospital. He was four when he went in, and six and a half when he came out. Fifty-five years later, he is making the most personal work of his life, and he has gone back to the trauma of that formative experience.

Moss has lived in Donegal for over 30 years, having moved from London where he worked with Auerbach, Bacon and Freud. His art practice has an edge, both social and political, sometimes this is subtle, often more direct. His paintings have been described as being ‘tinged with a rare, almost spiritual quality.’ For him, action and painting are one in the same – they are purely matters of conscience.

There is a pleasure in writing about art that wears its influences on its sleeves. Viewing Philip Moss’s work is not a simple experience; there are threads to pull on, curtains to pull back, and ideas, often tricky, to wrestle with. In writing these poems, I spent time reading around the paintings. I watched youtube videos of artists’ studios, read interviews with their assistants, and searched artworks referenced overtly and discreetly. I was also very lucky to have Moss himself to hand, always happy to point out what something is or to elaborate on his process, something rare and exciting to have access to. What I have written does not explain the work, rather it is the product of being introduced to the possibilities of the paintings and what they led me to on a particular day. It is wonderful to think that had I encountered them at a separate time, another year or season, I might have written something completely different. I hope that through viewing the exhibition, either in person or through this publication, and meeting the corresponding poems, you might find something you can approach again and again with fresh eyes and ears.

On admiring the curtains in my friend’s mother’s house
she explained that these were her inheritance.
Chests of fabric saved over years. Accumulated
from Liberty sales and long closed haberdasheries.
Each curtain had been constructed by hand and machine.
Ticking thick and weights, double lined for privacy.
It is such a luxury, we all concur, to shut out the world,
to draw them closed, black out the light momentarily.

Solitude is so very difficult to hold onto. Perhaps
if I were to start it all again I would begin here, with the fabric
on my lap, pinch and sew until I have a cover to cover it all
from ceiling to floor, puddles of linen, velvet, printed cotton.
Had we never tried to peek, we wouldn’t have seen Maria Martin,
headless and holding up Teeny’s arm.