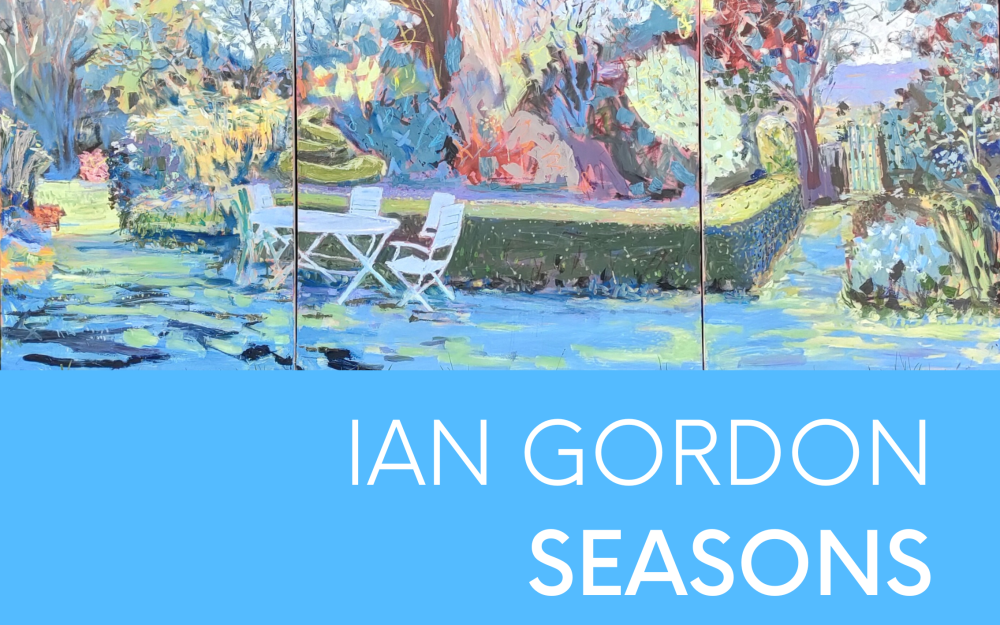 The RCC exhibitions are open on
Tuesdays – Fridays from 11am – 5pm
and Saturdays from 1pm – 5pm.
How To Book

London-born artist Ian Gordon has lived in Gweedore for forty years, slowly developing a two track homage to the west coast landscape.  His own Land Art ‘ burying pieces of embroidery out in the wilderness ‘ and plein air painting to document the outdoor experience in oil paint.  One inspires the other, and in SEASONS we see embroideries waiting to be buried, and the march of the seasons in oil on canvas.

Seasons is an exhibition that not only engages with landscape as a spectacle of natural beauty, but delves into how deep the connection between art and our environment can be. In his use of en plein air painting, Ian Gordon has developed a practice that necessitates repeated engagement with the land surrounding his home on the slopes of Errigal and further afield around Donegal. Each canvas represents a new conversation with these landscapes and it is this newness that enlivens the work. Rather than simple repetition, this act of consistent approach has made a body of art that, when looked at as a whole, creates an impact that is greater than the sum of the individual works.

The inevitable temporality of nature is at the heart of Gordon’s work. This preoccupation is shared by the land artist Richard Long, with whom Gordon has an affinity. Long’s most famous work ‘A Line Made by Walking’ is immortalised in a photograph of this titular line worn into a patch of grass by Long’s repeated steps. The line itself has long since grown over. Placed alongside this artwork, we can understand Gordon’s art as more than an endevour of recording, but a practice of physical engagement with his subject matter.

Gordon has been planting trees on his land since 1984, a long enough time for many of them to grow to maturity, changing the views from his studio gradually. From time to time he will fell parts of this new forest, not only for practicality, but in a way that will create new landscapes, exposing hills and sky, from the ones already formed by his labour. An understanding of this act of seeding and felling is a good way to approach Gordon’s embroidery work. Each piece of embroidery is the seed of an idea. The words embroidered can have deep emotional connotations or be simple fleeting fixations. By burying them, Gordon places them within his landscape, not visible but an intentional component of his psychic understanding of the geography. These embroideries can be dug up, forever changed by their internment, once again altering the land but this time with their absence.

When looking at these artworks, consider their placement around the room, the cycle of the seasons that alters colours, the shapes of the trees. Consider also the laneways and stone walls, each an act of intention, of action and repetition. Somewhere inside these paintings is Ian Gordon, again out on the hills, in the woods, approaching the world and his art freshly, ready for it to be new.

Ian Gordon has lived in Dun Lewey, County Donegal for over forty years.  Born in London, he studied Fine Art at Wimbledon School of Art and Architecture at Q.U.B, without graduating. As a Plein Air painter in oils, he makes vigorously expressive canvases of landscape and streetscape of the northwest. Exhibiting regularly with Solo Shows in Donegal, and occasionally further afield including the U.S.