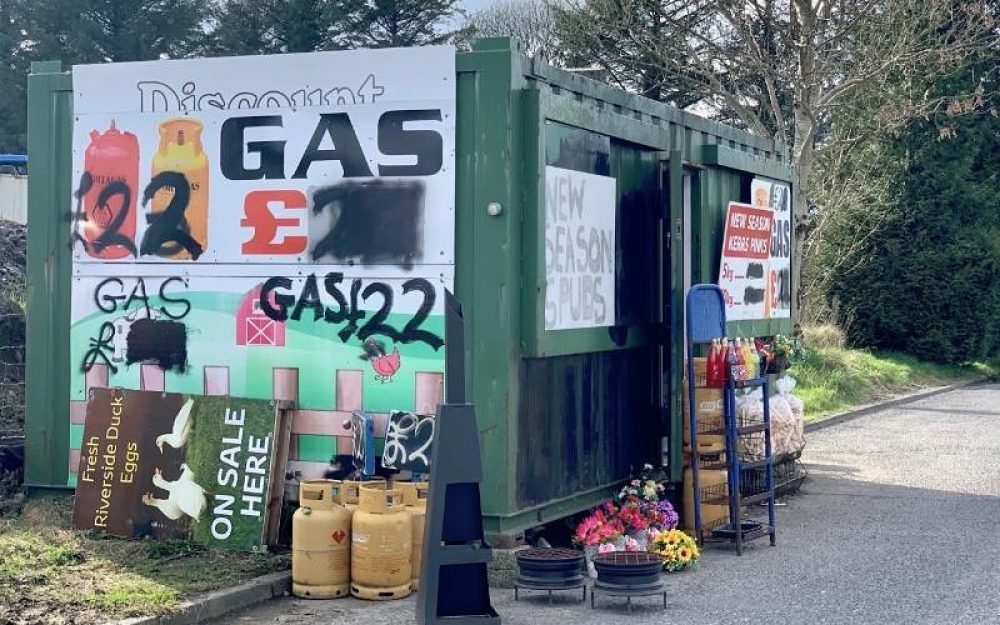 As it is the centenary of Ireland’s border Donegal’s Artlink invited four artists and to create new work on and about the borderline. Frontier Work was originally just a working title for the show but it stuck, perhaps because fits well with the direct and meticulously produced artworks on show. The artists featured are Noel Connor, Janet Hoy, Sue Morris and Anna Marie Savage. The border landscape, place names of Belfast, Armagh vantage points, frontier roads and businesses and much more besides have been documented by the four artists.

There is an engaging mix of materials and processes in the show, Anna Marie Savage’s work may at first look the most traditional, oil paint applied with a brush, but it is not often you see circular paintings. Furthermore, her process began by using a drone to photograph the landscape from above.

Noel Connor’s wonderful short film Lost Lines takes us back to the Belfast of his youth. Noel is also a poet and the film includes two of his poems, both read by Noel himself. For another section of the film he needed an actor to read out a list of placenames and recruited his own nephew, Colin Connor. His recital makes Belfast place names into a poem of their own, one about memories and associations.

Sue Morris has collaborated with Greg McLaughlin, together they have photographed border businesses dotted along the frontier: road-side vendors, used-car dealerships, currency exchanges, amusement arcades and filling stations. Borders are often sites of division but also places of opportunity for trade and exchange, this is just one of many paradoxes found along a living border like Ireland’s. By using two slideshow montages, projected side by side, her work cleverly puts a sense of duality right at the heart of the work, so that it feels like the border itself.

Janet Hoy also travelled and photographed the border for her work, but the first thing you notice is her work’s primary material: Bord na Mona peat briquettes. She is probably not the first person to build a wall from peat briquettes, but she may be the first to use 400 of them. Janet’s chosen material makes ‘Turf Wall 2021’ a wonderful combination, or perhaps clash, of the political and the domestic.

The curator of Frontier Work is Garrett Carr, the author of The Rule of the Land: Walking Ireland’s Border. He points out that for all of its existence Ireland’s border has been contested and its future in question. “In such zones of uncertainty visual art offers new ways of seeing and thinking. All the works in Frontier Work have one thing in common. The artists have taken direct approaches, representing landscape, topography and place with a wonderful honesty. You may come away from Frontier Work thinking a little differently about the place.”