“Sly and cunning with a great hook. I really like this…”

“Invaderband’s idiosyncratic brand of garage-laced artrock betrays the hallmarks of a band content in doing things their way without neglecting the power of the hook..” The Thin Air 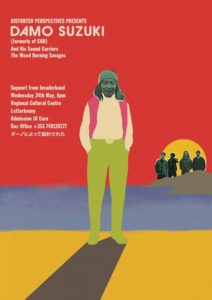 Make sure to copy Registration number after successful submission.

Thank you for payment.

Your ticket for the: Damo Suzuki (Japan/Germany)